Ltd Gallery: From the Toy Box...

Hello All. The online gallery is up and running for the "From the Toy Box" show at Ltd. Gallery. Go check out it's nostalgicness and purchase lots of awesome art.
Here are my final two pieces: 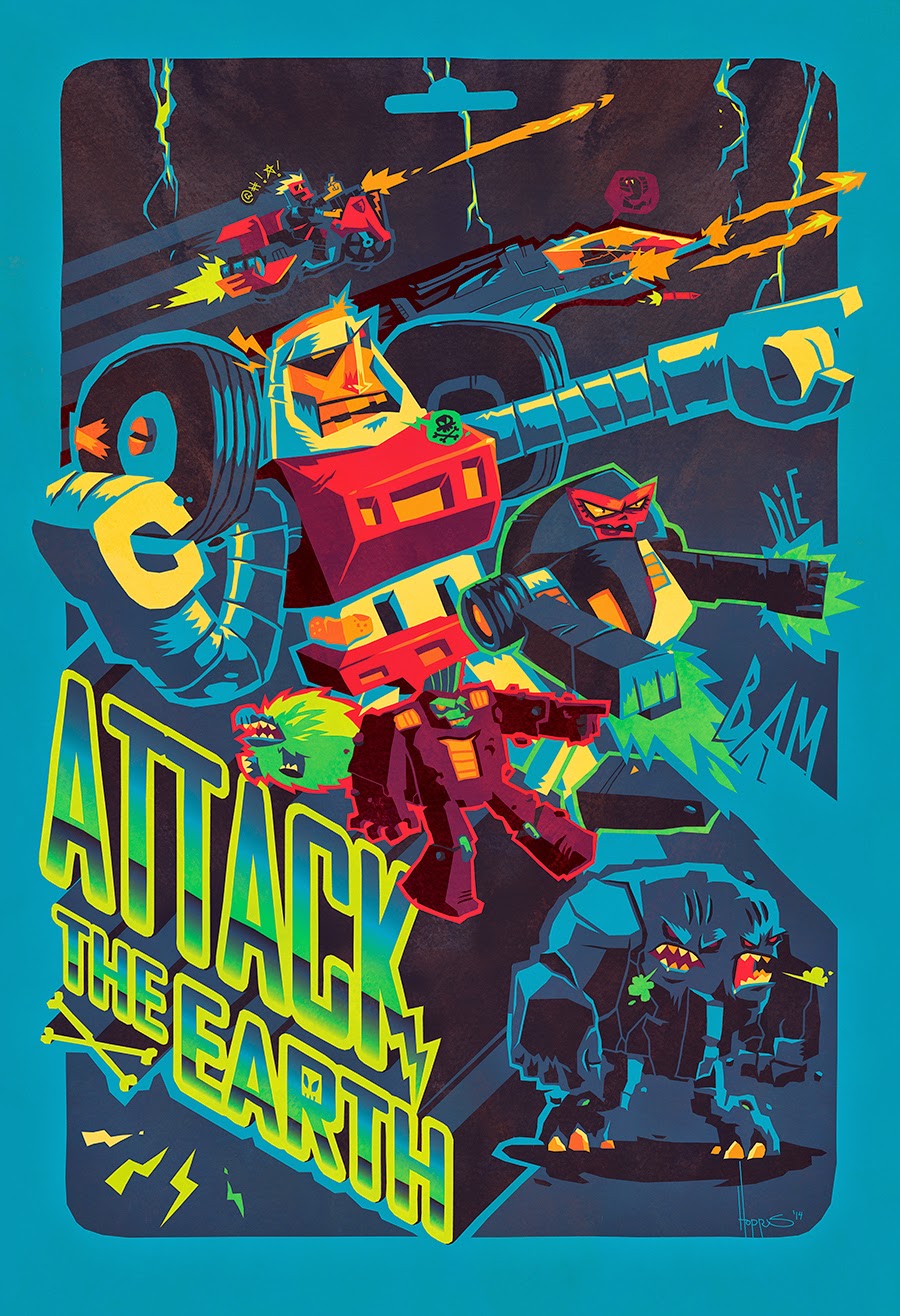 Cy-Kill leading the attack on Earth along with Crasher (GoBots), Magmar, Sticks and Stones and a Gnarly (Rocklords), and Switchblade and Vampire (M.A.S.K.) 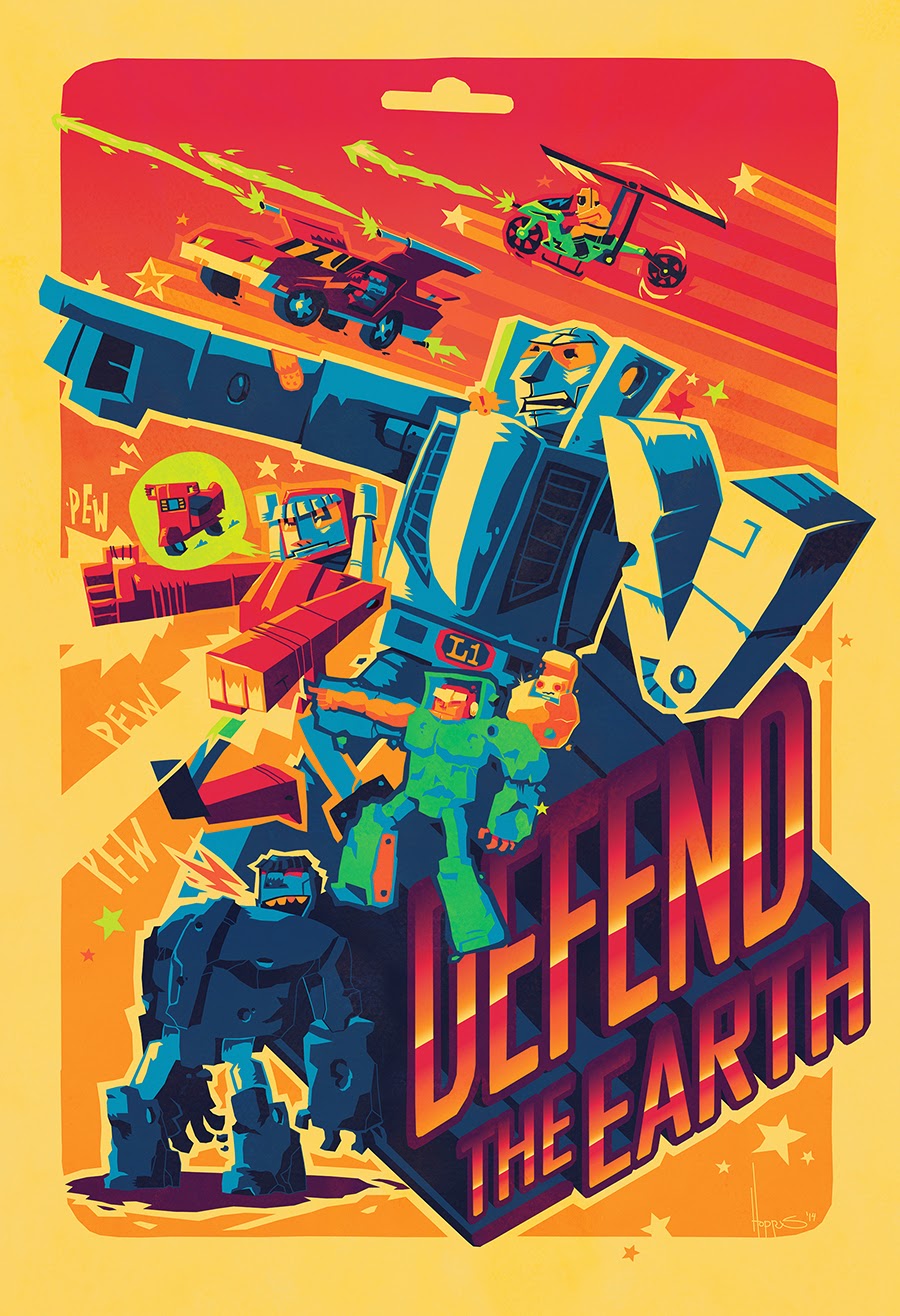 Leader 1 calling on heroes to defend the Earth with Scooter (GoBots), Boulder, Nuggit, and Granite (Rocklords), and Thunder Hawk and Condor (M.A.S.K.)

I thought they came out pretty cool. I wanted to do something very bright and colorful, but with a limited palette. I also wanted to get the feeling of the old packaging art style, as well as kind of a propaganda poster feeling. Head over to the gallery now if you want to snag one or both of the beauties. Digital Giclee prints 13" x 19" for $40 apiece.
Posted by adam H. at 3:33 PM 5 comments:

Man-oh-man what a busy year it's been!!! I've got a couple pieces in an upcoming show at Ltd Gallery in Seattle. The theme was "From the Toy Box", a show about our favorite childhood toys. 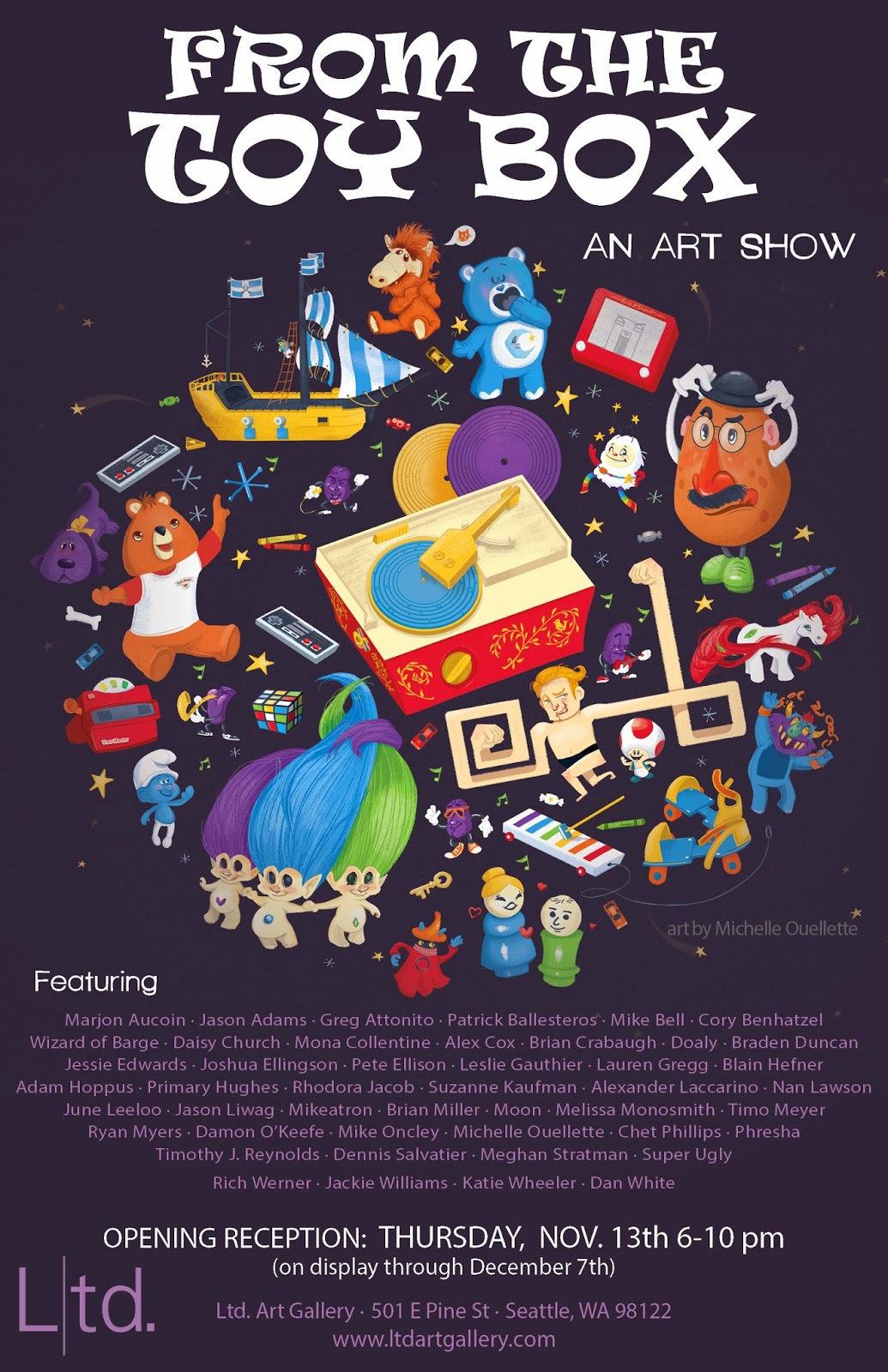 How could I resist participating since it's no secret I frickin' love toys. Here is a sneak peek with my usual super crude sketch/color study in Photoshop. I'll reveal the finals once the show goes live.

So if you're in Seattle on November 13th go check it out. Otherwise you can see the work when it's posted online.
Posted by adam H. at 12:37 PM No comments:

The Dream Arcade show is up on Light Grey Art Lab's site. Opening night was awesome! Head on over to download all the super cool games and buy tons of art! A big thanks to Chris Hajny and all the other crew at Light Grey for all their hard work assembling all the games!!

A few days left before the Dream Arcade show at Light Grey Art Lab. This post is about cominc up with my game concept, particularly how I wanted the game to work and the world it took place in. I will also be showing how my heroes from the last post transitioned to their pixel art form.

My first ruff layout the world here shows my thoughts on having a king and queen to rescue. Each being held captive by a specific set of enemies in a different part of the game board. This of course meant that now I had to create two sets of world assets instead of one. One for the above ground, and one for below.

Then the idea of going after the three main flavors of ice cream princesses popped into my head. That lead to the above concept and here you can see where I've mapped out location of the princesses, and some of the other world collectibles like the Sacred Cones and Sacred Scoops. I've also highlighted pitfalls, traps, and play paths. This layout also required me to make THREE sets of world assets. A Vanilla world, Strawberry world and Chocolate world. 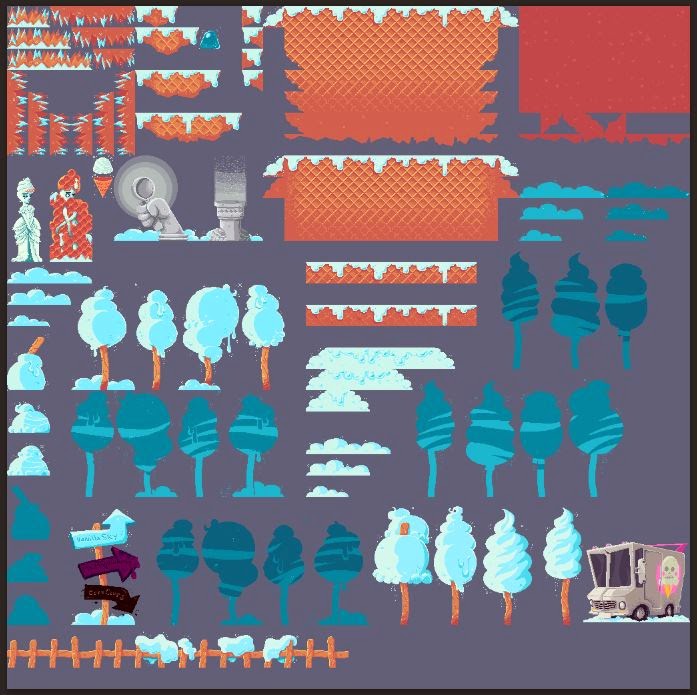 Here is an example of what one of those world assets files looked like. These are most of the assets used to create just the Vanilla world. It includes ground tiles, platform tiles, background and decorative elements, hazard tiles, collectibles and basically anything else I can think to cram in there. When this is all assembled it creates something like this... 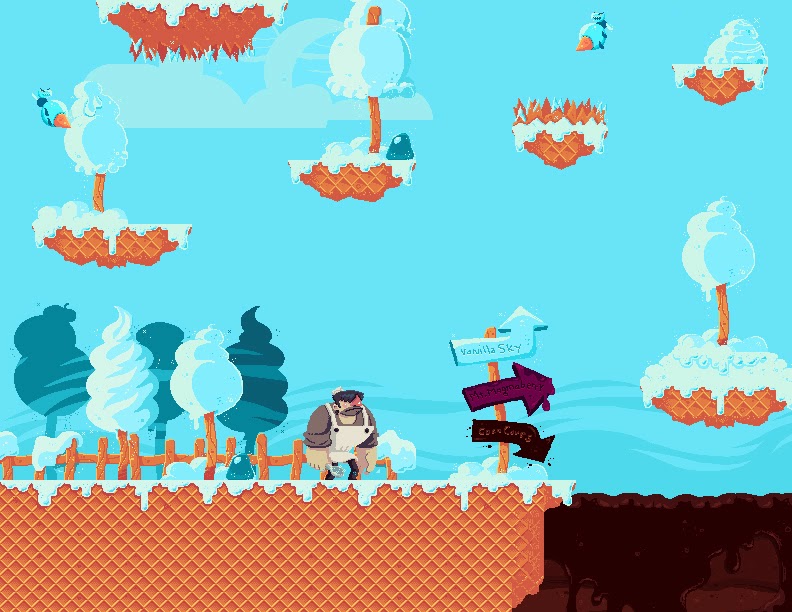 (Note: The background was not the final background I went with for the Vanilla World) Here you can see the theme of Vanilla world was cones and ice cream. Popsicle stick fences, ice cream cone trees, waffle cone ground, and mounds of delicious vanilla ice cream hills. 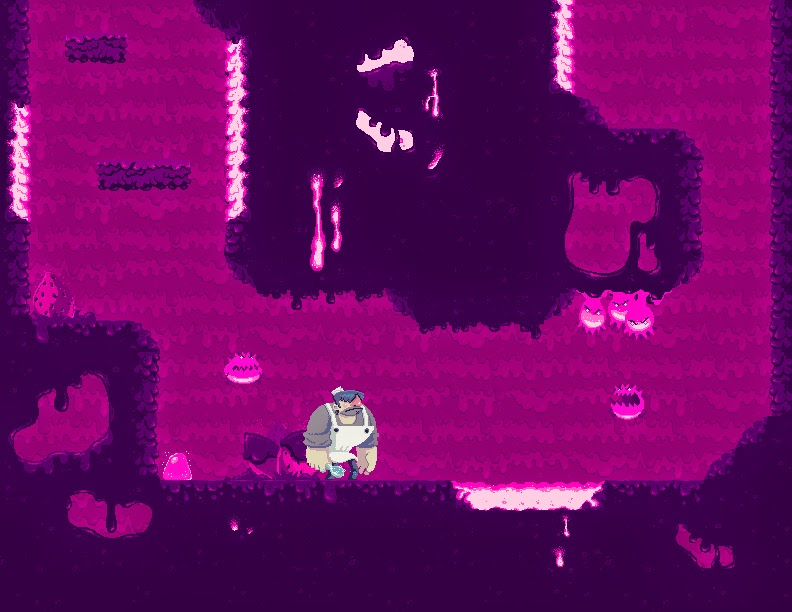 Strawberry world takes place inside a giant, molten strawberry jam filled volcano. Here we have molten jam filled lava pits as well as the evil Berry Bombs floating around and hanging off ceilings ready to stop Carl in his tracks. 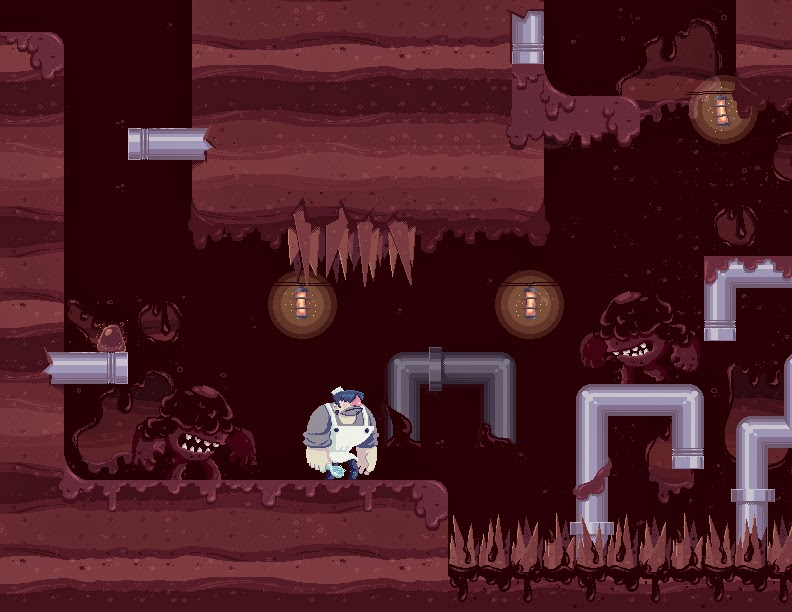 Lastly, Carl must travel deep underground into the Cocoa Caverns to find and rescue the Chocolate Princess. He must travel along the old pipes used to supply the world with melted chocolate all the while trying to avoid the Cocoa Creepers and dangerous peanut brittle shrapnel.

Let's look at how our heroes transitioned into pixel form. (Sorry for the low res jpegs..they are super tiny sprites after all).

The final Ice Cream Carl all ready for action standing by his trusty ice cream truck. He's complete with his magic ice cream scoop and has been cleaned up some from the concept art. Scars have been replaced with rosy cheeks.

The Royal Family; The Neopaliking with his three daughters. I'm was pretty pleased with how much detail I was able to retain with such tiny pixel counts.

Our monsters; The Cocoa Creeper, the Cone Drone, and the Berry Bomb. Each one of these race of creatures have kidnapped one of the princesses and has imprisoned them. 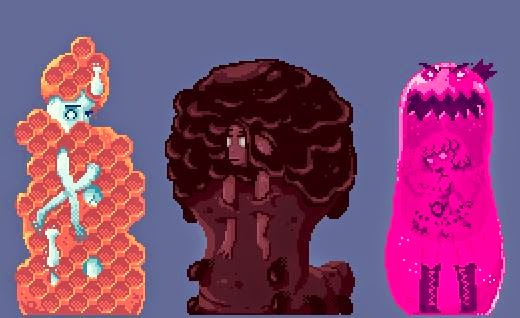 Lastly, a sneak peek at my cover image for my game. 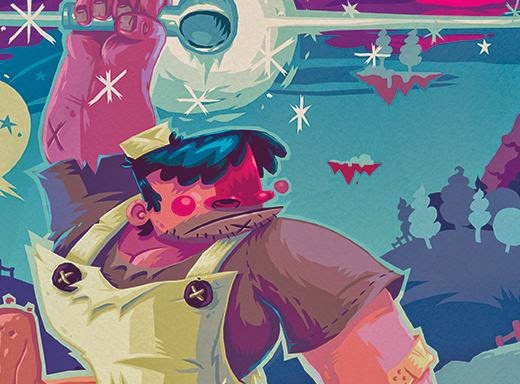 Hope to see you guys there this Friday. It should be totally awesome to see all this adventure in action!

I'm getting pretty excited for the upcoming Dream Arcade show for Light Gray Art Lab! We're about two weeks away and I wanted to start peppering my blog with some of the process work that went in to this giant ass project for my game.

I'm going to start by talking a little about the characters and the development of the "story" for the game. I tossed around several ideas around what I wanted to spend a solid two months drawing, animating and fussing over. The characters and story were very organic and a change to one shifted altered the other.

Essentially the game format is a platform style and pick up collectibles game. I wanted to make a world that was overly sweet and cute, but you played a horrible monster character that bullied and destroyed the world. So basically you played a bad guy. I landed on the concept of a cookie world and you were this brutish baker.

My original sketches for the "baker" basically looked like a prison chef. I thought the idea was just too funny of this brute savaging these cute little characters while running through a cute cookie world.

I picked my favorite heads, cleaned them up a little and started playing with the color palette. I really loved the guy on the far left. I think that was the idea I had in my head the whole time.

This was basically the first pass on the body and I loved it. Maybe I should have sketched a few more ideas...but I just really wanted this to be the guy I animated for the main dude. Along the way I was also sketching the other world characters and something just wasn't meshing. I started to dislike the cookie and candy world idea as I drew characters. I also didn't like the idea that this guy just ran around killing cute cookie cops and sweet/sexy fairies anymore. The drawing above reflects the sketch where I changed him to be an ice cream man instead of a chef.

Sketches showing some ideas around the game's cute cookie and candy characters as well as cute/sexy fairies. Keep in mind you would have been killing all these characters. Ha. After I decided that the game took place in an ice cream world, I named the main character "Ice Cream Carl" and the structure of the game really changed.

The game now became an adventure requiring you to save the three ice cream princesses of the Ice Cringdom. I wanted each princess to reflect a little bit of personality of the flavor of ice cream they were. Vanilla Princess is very pure and elegant. Strawberry Princess is a little wild and debonair. Chocolate Princess is sexy and seductive. I'm not overly crazy about the Jessica Rabbit similarities with Chocolate Princess, but I didn't notice it until after I drew her and I was running out of time to design new stuff.

You begin your journey by having the Neapoliking instruct you to save his three daughters. I wanted to incorporate all three flavor influences in his design.

The game allowed the artists to create three enemies. A walking enemy, a floating enemy, and a flying enemy. Since you have to traverse three different flavor worlds, I wanted to dedicate one enemy to each world. I think overall this will really make each world feel really special. I will get to more of the world design later. The Vanilla world takes place in the sky. I chose the flying enemy for this part. After several designs I went with the "Cone Drone". It's cleverly disguised itself to blend in with the cone and ice cream surroundings of the vanilla world. It flies at you with it's deadly cone spike. For the strawberry world, which takes place in a molten jam filled volcano, we have the floating enemy, the "Berry Bomb". These spiky pests float around the tight tunnels and hang from the cavern ceilings in the volcano waiting for the right moment for you to come across them to get exploded. Lastly the "Cocoa Creepers" of the dark, underground Cocoa Caverns. This one started out as a part of another design path I went down where I was creating all of these rotten teeth monsters called "Sweet Teeth". I abandoned that idea, but one of the designs was altered a little and became the final design for the walking enemy.

So many Sketch_Dailies drawings lately. Here is inquisitive Jack pondering the questions of his universe.

Wanted to do a quick one for Sketch_Dailies topic of Hellboy. I went with the trusty ol' color blocked art style on this one. His big arm is a little weird looking, but I'm okay with that. 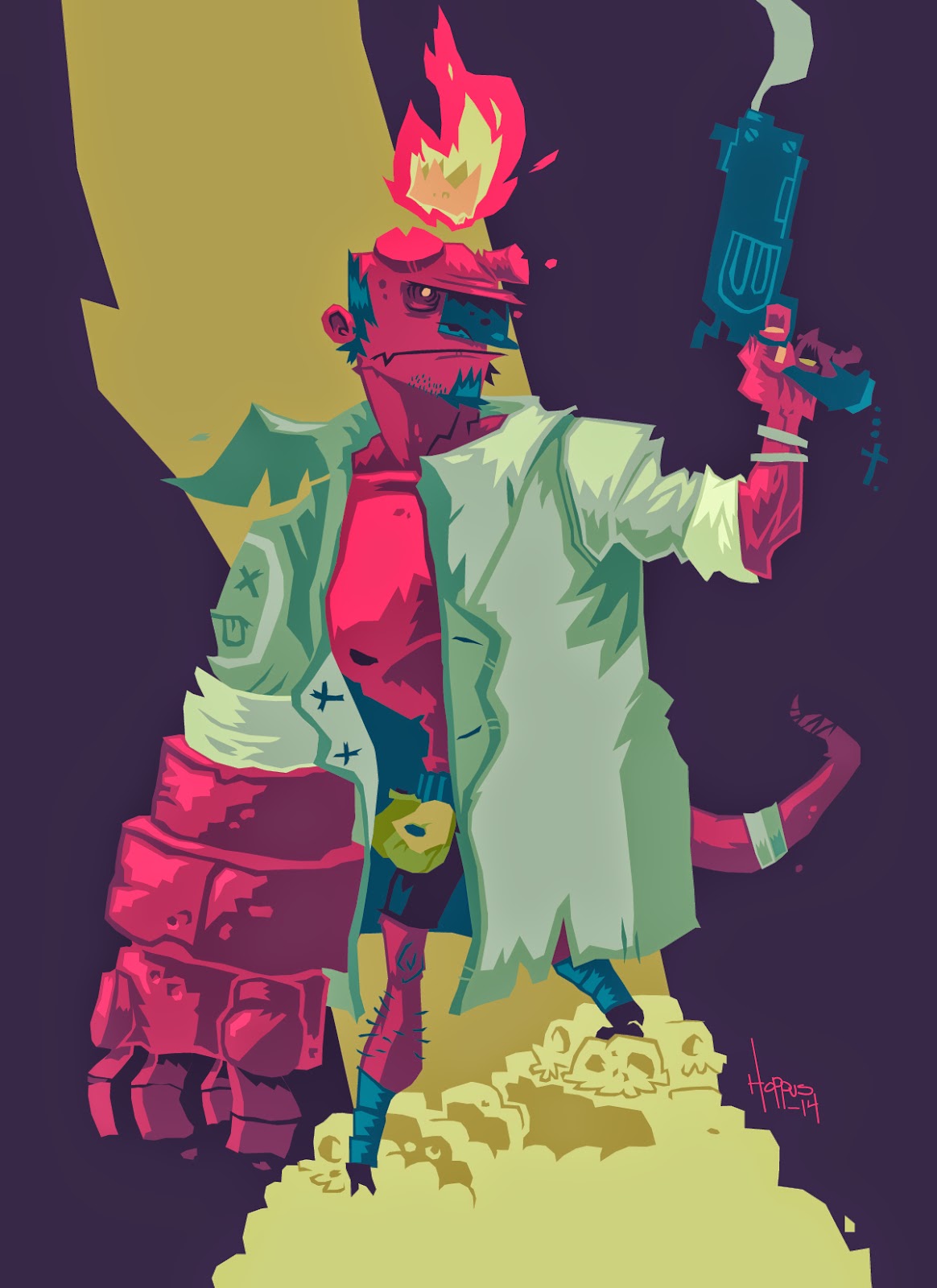